I keep thinking that I should stick up a post dated journal entry but never get around to it. This is a place-holder until I write something to go in here.

I use my friendslist to follow certain journals and I use other people's friendslists to follow other journals that I'm interested in - keeps them nice and neat. I think there's only one friendslocked post - I'm not that controversial or interesting.

I admire icons in other people, but haven't created many of my own. Maybe I should start.

My sister is due tomorrow. She asked me to make her a baby sling, as she couldn't find any for sale in the shops. I said yes, then went looking to see what a baby sling actually was.

Since I found out I have knitted:

1) A pair of booties

Today, I started with sling one. It's on fabric I picked up at the knit and stitch show - yellow and red check and it's ... done. The thread stands out and the finish is not neat.

Sling two is a fabric that has an ugly reverse, so I put some fleece into it, then rolled the main fabric, so that it would be seen on the tail. Now, I started badly, had it a yard too long and it was so thick at the ring, that I had to wind the machine by hand.

Since I finished it, I've realised that I didn't need to sew up the ring end - and not doing so would have reduced the thickness here by 2. Of course, it is not neat.

Anyway, I'm not redoing the other two - yet - she may return them after I hand them over, but anyway, the important one is finished and I'm finally ready for her to have the baby.

Thank you, Cairnsy, for the belated birthday wishes and the drink.

I've not been posting much, but I've been checking my friendslist. I haven't commented much, as I'm way behind you on Bleach. Way behind.

I recently realised that I've written more than I thought I was. There have been no fic, but I've been writing up session logs from the weekly game, more or less each week and I tend to dash off long ones when I really need to write something. Last session is tomorrow, so maybe after that's done, my writing goo will move into another area.

I've written a few non-fanfic pieces as well, and spent a year writing and rewriting one of the Saiunkoku Challenges.

I'm way out of touch with manga. I used to have a file at Forbidden Planet. It was handy, as they'd put aside books for me, since I ordered two magazines. Anyway, I got a message from them one day saying that I hadn't been to pick up my file for about a month and that they wouldn't be able to hold it for much longer. I went down the very next day and found
out that they'd put everything on the floor already and some of it had sold. I didn't go back.

Guess I got out of the habit of browsing and it was a pain to walk down every thursday. (Which you needed to do if you wanted to be sure to get the stuff you wanted).

I have been reading the Haruhi light novels. The second one is awesome, but the third had nothing new in it - it is a collection of short stories that were in the anime. Maybe I'll like it more the second read through.

I've also been crafting. I made a wedding dress last year and right now I'm trying to make stuff for my sister's baby. Anyone got any good patterns?

I saw an ad on the telly for Zelda Spirit tracks and at one point it said "If you liked Professor Layton, you might like the puzzle solving of Zelda".

First I thought, that comparison's a stretch. Professor Laytonites won't like the combat.

Then I thought OMG, to the non-gamer world, the name Legend of Zelda means nothing and they're using a popular new IP to sell it.

I couldn't decide whether to be sad or amazed at that.

It was not what I expected. The screens showed footage from the games as the orchestra played, and I was staring at it so hard that I nearly didn't notice the guy in black ops gear get on stage, or the white box, or Master Chief.

Pity poor Dave, who only had two space invaders left to shoot, in order to win an awesome retro game cabinet. Cheers to the other guy, who played guitar hero on expert mode, when he only was supposed to do hard.

And please Squeenix, give them permission to use footage from your games. The cosplay pics were cool, but there was nothing to show off Chronotrigger and you did make an OAV for it.

Something's gone horribly wrong with the world. I saw this and laughed through it, but I've since seen the Ghostbusters incident, as well as the bootcamp incident and... well... I love them.

How can they pull this off, week after week, with no trace of embarrassment? Maybe the huge cheers from the studio audience help, but by gawd, they have made my week. I hope they survive - they won't be as good (as in bad, but good) or as funny, once they're off X Factor and into some other TV vehicle, but I will always remember that John dove into the sea to get the necklace for Edward.

One of my favourite things to do right now, is wear my cat Nenya as a scarf. She's surprisingly biddable, although she probably reckons that it will gain her affection, which will lead to more food. She puts up with an awful lot of stuff - the only cat I've met that doesn't mind having her fur rubbed the wrong way - and she really likes food.

Precious is far above these things. She gets hungry at dinner and breakfast and that's it.

They have both decided that they missed us terribly while we were away and have unleashed the most ferocious attention storm on us. Somehow, someway, they've learned to share. Precious has been getting a lot of lap time, and Nenya's been jumping onboard when I'm sitting in awkward poses and less catducive.

I don't know if this'll hold up over time and they realise that we're not leaving again, but it's fun at the moment.

I play a Star Wars game every friday. It's been going for over five years, but I'm an interloper that came in during the second campaign and the current FarStar sessions are my first full campaign.

Anyhow, for extreme bravery and/or stupidity, certain party members were awarded medals by the Captain. IceCream printed out pictures of medals and handed them over during the game, in an awards ceremony. Afterwards, Black Robed One said "Vuirneen can make actual ones".

I quickly decided to ignore the mold issue and buy the attachment from the jewellery shop, but these took a long time to make. Lots of stages where I didn't know what I was doing, until it was done. 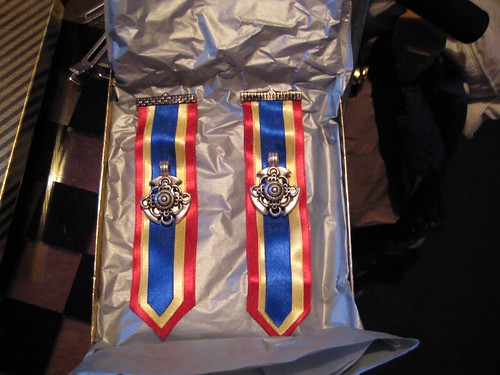 I voted for Bill Nighy, or the hot, black guy from Green Wing, whose name I don't know yet.

We should look beyond the hair, but an older Doctor would have been awesome.

Oh and it's Patterson Joseph.

I have absolutely no goo to write. Even during the wednesday exile, when gamers are downstairs, I spend hours surfing the internets, finding nothing. At the very least I should get my wow on. I failed the last circle challenge. Tried my best, and got further than some of the others did, but still nowhere near the 10k mark. Also failed nano, although I was enthusiastic when I finally started, a week late, (at this moment, with 49k to go, I'm calling it.)

There have been distractions - Persona 3 called me for a month, then sunk its claws into me. I have had cold hands and needed a pair of gloves - almost finished. And there's small kitten.

Small, furry kitten got spayed last thursday and has been a staggering, disoriented, hilarious, small, furry kitten with a cone on her head, ever since. SDHSFKWC is sometimes able to manouver about to eat food out of the bowl and sometimes needs to be hand fed. She's allowed on tables to drink out of people glasses and is lifted onto and down from everything. She's sleeping, or resting in laps, as much as possible. She is also, despite displaying her ability to use the litter tray, consistently weeing in the other cat's water bowl. But at least Precious isn't growling at her anymore. That was worrying.

Precious was not like that at all when she was spayed, but she's a quieter, less energetic cat, who didn't have a cone on her head. When we took it off to let SDHSFKWC eat, she was almost herself. But, thanks to Precious, and countless cats like her biteing off their stitches, cones are prescribed for all surgeried kittens.

Anyway, I'd better surf the internets for wedding stuff. We've booked the venue and the registrar for September next year. We have to plan a holiday next year, so that we can fulfill the residence requirement. And I'll need someone to mind the cats.
Collapse